Philippine-American Writers and Artists, in partnership with the San Francisco Public Library, will hold the Fifth Filipino American International Book Festival. In response to the urgent call of the times, marked by increasing anti-immigrant rhetoric, the theme of the book fest is “Isang Mundó (One World): Humanity, Diversity, and Resistance in the Arts.

HOT OFF THE PRESS Literary Readings

This year’s book festival promises an exciting and diverse program. Immigrant rights activist and Pulitzer Prize winning journalist Jose Antonio Vargas will deliver the keynote address at the October 13 opening plenary session. Vargas, who penned his moving memoir Dear America: Notes of an Undocumented Citizen, has been a staunch advocate for the rights of the undocumented in the U.S. He is the founder of Define American, aimed at promoting dialogue about immigration issues, including the Dream Act, which would provide a channel to citizenship for the undocumented.

Vargas will join authors, educators, and activists from the Philippines, New Zealand, Canada, and major cities in the U.S. for a weekend of literary events, performances, and activities for book lovers of all ages. The only gathering of its kind and with this level of continuity in the Filipino diaspora, the book festival enables Filipino writers from diverse “homes,” genres, and generations to come together and share their works in fiction, non-fiction, and poetry, as well as their unique writing experiences. 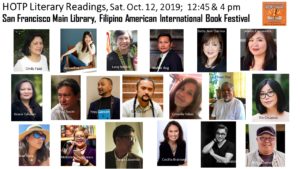 October 12, 2019 (Saturday) - 12:45 pm to 5:15 pm - Filipino and Filipino American authors with recent published books will showcase their books at the HOT OFF THE PRESS Literary Readings at the Fifth Filipino American International Book Festival at the San Francisco Main Library.