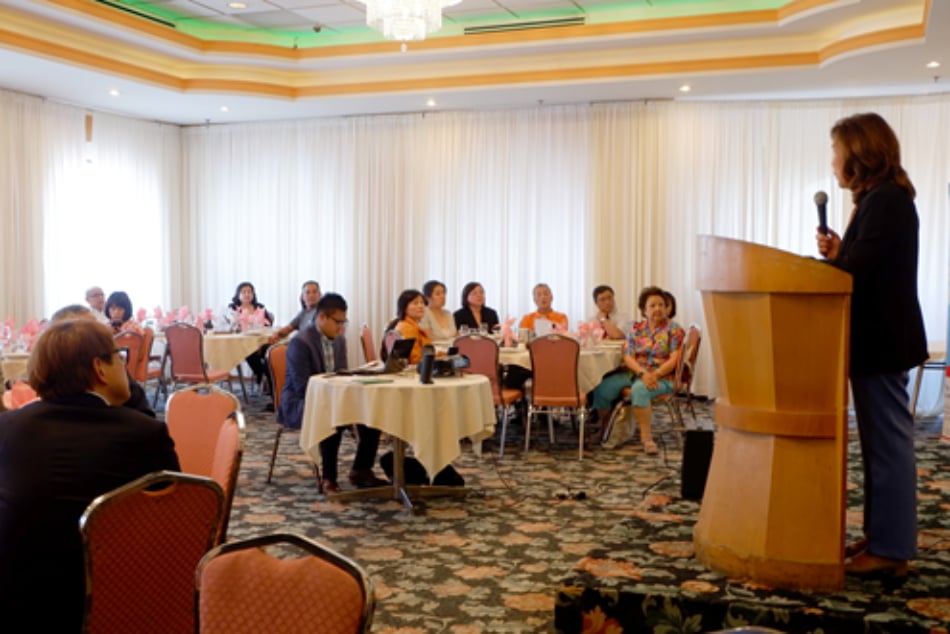 San Jose, CA—With Asia Pacific quickly rising to popularity as a preferred destination among travelers from the US, the Department of Tourism (DOT) has set its sights on ‘twinning’ Philippine destinations with those of other countries in the region.

Speaking to 40 Asian-American travel agents and media representing Vietnam, Thailand, Hong Kong, China, and Taiwan; representatives from PAL, as well as members of the Philippine delegation, Tourism Secretary Wanda Tulfo-Teo solicited their support in strengthening people-to-people exchanges and tourism activities between the Philippines and their countries during the Philippine business mission held Monday in San Jose, California.

“There is no better time than now to leverage on the dawning of the Asian century. As early as 2014, the other side of the world like the US has begun discovering and rediscovering the Philippines placing us on the top four preferred destinations along with China, India, and Japan,” the tourism chief was quoted as saying.

“We will take advantage of the Americans’ interest on the Philippines, we should strike while the iron is hot and craft all the strategies that can capture the market to the Philippines,” added Purificacion Molintas, DOT Attache in San Francisco.

According to Teo, travelers from the US visiting the Philippines usually connect thru Hong Kong, while some of them fly next to Singapore. Citing a 2016 DOT survey, she said these US travelers also prefer Bangkok and to Kuala Lumpur as connecting flights to the Philippines.

“It is also interesting to note that 15.80 percent of these travelers from the US consider other traditional domestic destinations such as Cebu other than Manila; Palawan (9.30 percent), while 6.60 percent of them go to Pampanga—which has strong affinity with Clark, Subic, and La Union, especially among Amer-Asian descents of former US servicemen—and 6.50 percent still consider Boracay a favorite choice. And I am confident that this will continue to be commonplace, as our country’s air carriers like Philippine Airlines continue to expand its services in connecting our primary and secondary gateways,” the tourism chief added, citing some of the country’s existing inter-island connectivity and international connecting flights.

“Asia Pacific is considered an ‘exotic area,’ and everybody now is looking at the region as their new destination, particularly most Americans who have been to Europe, South America. And it is only now that they are able to discover the Asia Pacific region.”

“While destination twinning has already been an established program of the DOT in the recent years, we have been working to expand the reach of this strategy to new emerging markets like Vietnam, Thailand, and Malaysia, among others. I have personally instructed our overseas offices to beef up their respective networks and hone them along the way. And in the case of San Francisco, this is the very first time they are touching base with Thai and Vietnamese travel markets, only this year. Our target for them is to increase these markets by 10 percent in the next two years,” Teo shared.

Molintas explained that the DOT San Francisco has recently started implementing this ‘twin-destination’ promotions in collaboration with DOT Los Angeles targeting Thailand, Vietnam and Malaysia, citing California, along with Vancouver, among hosts of the most diverse Asian diasporas in North America, making them perfect markets for the program.

Teo disclosed that  one of the immediate plans of the DOT is strengthening its partnership with the travel trade in the West Coast, which already committed to produce tourists all over the US to twin destinations of Manila and Bangkok in October this year in time for the memorial service of the King of Thailand.

DOT San Francisco is also pairing off Manila with Vietnam, with PAL offering special rates for Manila-Saigon, US-MLA-Siagon. The Philippine air carrier which has started giving out special rate promotions for Thailand, will soon be complemented by a network that will carry all tour packages for the country beginning the last quarter of this year.

Teo, for her part, enlisted the support from various stakeholders in implementing the ‘twin-destination’ tour packages, one of which is Philippine Airlines, which has been very keen to provide airfares at discounted prices. Eva Air, which flies to Cebu; Asiana Airlines, and just recently Korean Airlines which has added flights from San Francisco going to Manila, are among the airline partners which have been very supportive of the DOT in conducting its familiarization trips, and soon the Balikbayan packages.

“Twinning domestic destinations like Clark with other Asian destinations would be profitable as it is already a secondary gateway to Laoag, Vigan, and La Union, extending even to Baguio via TPLEX. Connectivity of our country’s secondary gateways has improved much better and making it even more convenient to travel,” Teo explained.

This will pave the way for the less-known and the least-traveled destinations to prominence. The tourism chief even suggested General Santos as one of the new destinations, which international boxing champ Manny Pacquiao could serve as a good leverage.

Teo is confident that twinning Philippine destinations will not only bring in foreign arrivals especially from North America, but also open up opportunities for domestic tourism and secondary gateways. According to her, the Philippines’ air connectivity has improved significantly over the years, which has seen the entry of China Air, Eva Air connecting Manila via Taipei and to Cebu-Bohol-Siquijor; Korean Air and Aseana Air also fly frequently to Manila via Clark, and between Clark-Davao; and Clark-Boracay.

On the whole, the US places second as the top foreign visitor market of the Philippines with 14.87 percent of the total market share, and bringing in 428,767 arrivals in the first five months of 2017. It has risen by 12.78 percent as compared to US arrivals in the same period last year with only 377,595. 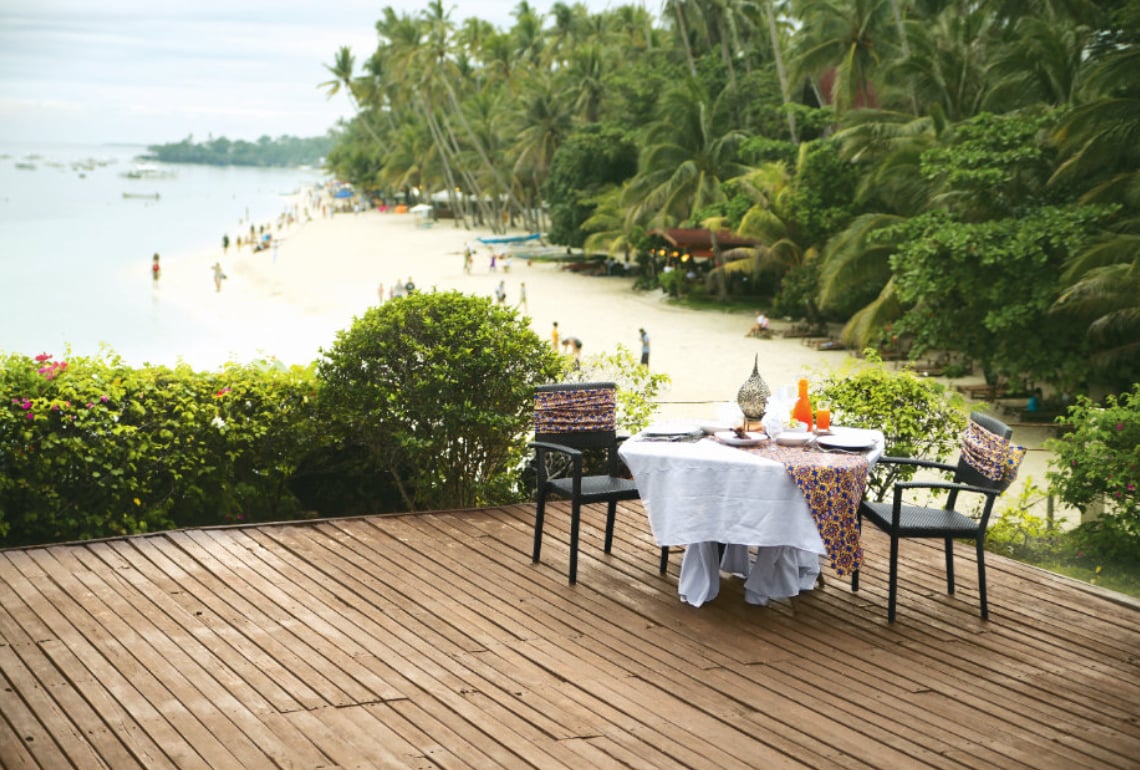 Preparing for a wedding can be too arduous and time-consuming which makes newlyweds crave for the events to follow the wedding itself. Still overwhelmed with so many options? Listed below are three destinations you can spend that sweet honeymoon like no other.

Taking a boat tour around dusk would give couples that unparalleled moment of watching the sun fall while holding hands. The night breeze and atmosphere might even join in the fun which would create nothing but memories for the two of you.

If you and your partner are inclined more towards attaining adrenaline, then fret not as Cebu is also known for water activities. You can either visit Moalboal to get a glimpse of the rich marine life underwater which cannot be seen in other places beside Cebu or Kawasan Falls, the best waterfalls in Asia, where you can raft through the three levels for a cascading massage. You can certainly never run out of things to do together in Cebu.

Not too far from Cebu, another famed tourist spot known as Bohol sits by. Newlyweds can witness majestic landscapes such as the awestruck Chocolate hills or drop by the Tarsier Sanctuary, the home of the smallest known primates, where a couple of Tarsiers are carefully taken care of without destroying their niche. At the sanctuary, the lovely wide-eyed tarsiers are trained to roost in during the day but are active and hunting at night which makes them free to roam around the area which is several hectares large.

One cannot leave Bohol without witnessing one of its pride and joy, fireflies. Fireflies can be found in Loboc River in which you would have to rent a boat to visit. Five minutes in and you’ll be guaranteed with small blinking lights swarming in and around the mangroves. The surreal atmosphere and gentle breeze while travelling along Loboc River will leave you and your partner reminiscing the day you met.

Certainly not what you have expected, Palawan makes its mark as the last one on our list. Sometimes referred to as Asia’s Eden, Palawan will be able to give you and your spouse-to-be the once-in-a-lifetime honeymoon both of you has always been dreaming of. Unlike the crowd favorite that is Boracay, Palawan provides the much-needed privacy to create lasting moments with only the two of you.

Believed as the last unspoiled paradise on Earth, the well-maintained Palawan offers so many couple activities you are encouraged to do. Kayaking your way to the amazing turquoise-green Big and Small Lagoons of Palawan which you could seclude yourselves and be astonished by the beauty of untouched nature. Explore the overwhelming Honda Bay and tunnel through the ravishing underground river of Palawan and leave nothing but priceless moments that you’ll cherish for your lifetime as one.

Want to make your honeymoon struggle-free? Leave it to our travel experts and they’ll make your dreamy honeymoon come true.